I'm excited to take part in Stacey O'Neale's release day launch for FRAGILE REIGN! Check out the book below and be sure to enter the amazing giveaway!

It’s been a week since all hell broke loose… Rumors of King Taron’s weakened powers have left the air court vulnerable. Kalin is desperate to awaken her akasha powers, except she doesn’t know how. Tension within the court is at an all-time high. Pressure is mounting for her to ascend to the throne, but a halfling has never ruled over any court. To solidify her position, the council has advised her to marry Sebastian—a high ranking air elemental she’s never met and her betrothed. Will Kalin sacrifice her relationship with Rowan to strengthen her court? Rowan and Marcus return to a fire court in turmoil. Liana’s death has fueled the fire elementals’ distrust against the air and woodland courts. The unbalanced elements have set off natural disasters all over the mortal world. Rowan takes the throne to restore balance, promising to unite the fire court. But not all elementals are happy with his leadership. Many are secretly loyal to Valac, which means Rowan needs to find allies for his cause. Can Rowan unify the court of fire before the elements destroy the world? Goodreads | Amazon
If you haven't read Stacey's Mortal Enchantment series, you can get the first book for FREE on Amazon and Barnes & Noble! The Shadow Prince won GOLD at the 2014 Readers' Favorite Book Awards in the Short Story/Novella category!

Rowan
After Marcus left, the lack of sleep and overuse of my power had finally caught up to me. My lids were heavy, making it hard to keep my eyes open. I laid down on the nearest bed, sinking into the softness of the vanilla scented pillows. I could rest here until tomorrow, and then meet Kalin on the beach at sundown. As I closed my eyes, I imagined her in that sexy sundress with the ocean breeze wafting through her red curls. My lips tingled remembering the raspberry taste of her kisses. With all this craziness going on, she was the one thing that made sense. The only person who could make me forget about everything for a little while.

Kalin was the one I wanted. The only one I needed. I shook my head. What was wrong with me? It was too soon to be thinking about this stuff, right? It had only been a few weeks. And what did I know about real feelings, anyway? Had it not been for Marcus, I would never even know what it felt like to care for someone. Love was never part of my life. My mother thought love was a weakness—a totally worthless emotion compared to power and control.

But that still didn’t explain how I was feeling. Why everything seemed better when Kalin was around. Why my fingers ached to touch her. Why her pain shattered me to the core. I put my hands over my face. Or, maybe the lack of sleep was making me delusional. With a smirk, I gave in to the darkness that was overwhelming me and fell asleep.

Stacey O'Neale lives in Annapolis, Maryland. When she's not writing, she spends her time fangirling over books, blogging, watching fantasy television shows, cheering for the Baltimore Ravens, and hanging out with her husband and daughter. Her career in publishing started as a blogger-turned-publicist for two successful small publishers. Stacey writes young adult paranormal romance and adult science fiction romance. Her books always include swoon-worthy heroes, snarky heroines, and lots of kissing. Stacey loves hearing from readers. Follow her on Twitter @StaceyONeale, look for her on Facebook, Pinterest, and GoodReads. You can also visit her blog at http://staceyoneale.com/.

Posted by Larissa at 9:30 AM No comments:

I'm back with the second installment in Jessie Humphries' Ruby Rose series! Check out my review of the first book, Killing Ruby Rose, here. Scroll all the way down for a rafflecopter giveaway, too!!!

Also, can I just say how much I LOVE what Skyscape is doing with their series?! I love that the subsequent books don't take a year to come out. <3 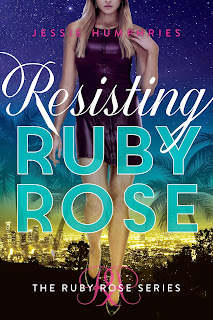 About RESISTING RUBY ROSE: Still reeling from the heartbreaking events that unfolded on Grissom Island, Ruby Rose is trying to come to terms with the fact that she’s gone from a vigilante in killer shoes to a stone-cold killer. Everyone from her therapist to her smoking-hot boyfriend keeps trying to convince her that she hasn’t crossed over to the dark side, but Ruby isn’t so sure. It doesn’t help that her nemesis, Detective “Mastermind” Martinez, is still out there, waiting for another chance to take her down.

When an alleged CIA agent named Skryker shows up and asks for a meeting, Ruby figures it just means more questions about her case. But he has information of an entirely different nature and a job offer: join an elite force of young assassins, including Skryker’s right-hand guy, Quinn Donovan. Quinn is distractingly charming, handsome—and deadly. Ruby resists becoming a killer again, but as she becomes more ensnared in a web of deceit, no one around her is safe.

My Review:
I actually enjoyed this book better than the first. The first half of this one is less about Ruby being a bad-ass, and more about what being a bad-ass and having killed people has done to her. I liked getting deeper into Ruby's character in this book.

Of course, there's still plenty of action, as Ruby and Liam get pulled into an organization of elite young assassins, and Martinez continues to come after Ruby and what's left of her family.

Quinn is an intriguing and fun new character, and I loved getting to know Damon Silver, Ruby's biological father, better, too. As with the first book, there's room for a sequel without leaving the reader hanging. I will be looking forward to that third book if it comes.

a Rafflecopter giveaway
Posted by Larissa at 10:23 AM No comments:

Are you ready for this?!


Geeky, squeaky-clean Max Kilgore only has one dirty habit: digging for fossils. One day, to his horror, his shovel strikes not upon a dinosaur bone, but a pit to hell—and out of it comes a devil. Specifically, the kind of devil who eats a lot of junk food, watches a lot of reality television, plays a lot of video games, and refuses to leave Max’s basement. But evil is still evil, no matter what form it takes. And Max has to find a way to comply with the demands of the big red menace, lest he lay waste to everyone and everything Max cares about.
With the help of Lore, a former goth girl who knows a thing or two about the dark side, Max goes in search of a new abode for his unwanted guest. Finding a place where he can reside in luciferian luxury isn’t easy, but Max has strong motivation: his mother, whose terminal illness the devil promises to cure if Max gives him what he wants. Lore has her doubts about making a deal with the devil, but Max will stop at nothing to save his mom. And pretty soon, he’s doing things the good kid he once was would never dream of doing. Clearly, hanging around with a devil is a bad influence. But how can Max get rid of the guy without incurring the wrath of hell?