A Special Offer From My Favorite Author

To celebrate the upcoming release of Once Burned, from now though June 25th, Jeanine Frost's publisher is offering a special ebook edition of Eternal Kiss of Darkness for only $1.99!  Eternal Kiss of Darkness won the Romantic Times Reviewers’ Choice Award for Best Vampire Romance and it was a New York Times, USA Today, and international bestseller.  Plus, in this limited-time discount edition, you can get a sneak peak at the entire first three chapters of Once Burned, available wherever books are sold June 26.

Order at: Amazon, Barnes & Noble, iTunes, Sony, Kobo, or your favorite ebook retailer.
.
Watch the new book trailer for this special edition of Eternal Kiss of Darkness:
Link to the trailer is here: http://youtu.be/vxiDLcSCP9g
Her Night Huntress books are my ABSOLUTE FAVORITE adult romances. So go get your read on!
Posted by Larissa at 2:12 PM 2 comments:

That Succs Query and 500 words

Hey everyone! I'm posting my query and 500 words for comment for a contest (details here).  I love feedback, so lemme have it!

Fifteen-year-old Emmy Duivel believes in true love: heart flutters, first kisses, candlelight dinners, even the crazy idea that love lasts forever. Unfortunately, she's stuck in a world of non-believers--her mom and best friend’s philosophy is “men are for fun, not forever.” Invisible in their shadows and pinned under her mom’s one-night stand only rules, Emmy has kept her romance novel collection—and crush on hot classmate, Paul—hidden.

But then the school's MVP, Jake Miller, asks her out. To her own surprise, she agrees, figuring her first date is bound to be a disaster. Her mom and her best friend tell her to take it slow and avoid kissing, and even Paul warns her to be careful on the date. However, Emmy gets carried away and kisses Jake--and he almost dies. Confused and scared she finds herself being consoled by the one person she didn’t expect--Paul.

But even as things heat up between her and Paul, Emmy demands answers from her mother, who explains the devastating truth: she’s not human and there is a price to pay for it. One human life a month for the rest of her life. And to make matters worse, the one person she thought she could trust has secrets of his own that could destroy Emmy and everything she holds dear.

Finding love is hard. Finding out you can never have it, because you're a monster? That succs.

THAT SUCCS is a 50,000-word YA Paranormal. I am a member of SCBWI and a Moderator on Verla Kay's Blueboards. Thank you for your time.

I stared in the mirror, wondering how Lily could possibly consider the piece of cloth she’d given me a dress.  It covered less than my t-shirt.
“Do you have it on yet?” she called through the door.  “Come on out.  I wanna see it.”
My cheeks reddened just thinking about walking out of the dressing room with the dress on.  “O-okay.  Uh, just a minute.”  I gave the hem one more tug, but it was as far down as it was going to get, which was less than five inches from my underwear and way too short for public viewing.  Then I had to tug the top again, since every time I pulled on the bottom, the top came down, too.  I give up.
I stepped to the door, when what I really wanted to do was take the stupid thing off and put my t-shirt and jeans back on.  Sadly, I didn’t have much of a choice.  If I didn’t come out, my best friend would insist, loudly, and by the time she got her way, there’d be a crowd.
With a sigh, I opened the door and stepped into the dressing room hallway.  My shoulders curled in as I tried to keep as much of my body inside the “dress” as possible.
“Oh, honestly, Emmy.  Stop hunching.  You look fabulous.”  She grabbed my shoulders and pulled them up and back so I stood straight, then she pushed me in front of the three-way mirror at the end of the hall.  “See?  You are totally hot.”
I looked, but all I saw was way too much of my own skin.
“Now all you need is somewhere to wear it.”
My eyes widened as I met Lily’s gray ones in the mirror.  “Uh, I am so not getting this thing.”
Ignoring my objections, she turned me around and sent me back to my stall.  “Now try on the skirt and tank.”
I rolled my eyes, but complied.  I wanted to go home, but it wasn’t worth the argument—I’d just end up doing what she wanted anyway.  It was a lot easier to do it, and then dump these “clothes” in the back of my closet and forget about them.
While I changed, she talked through the door.  “So, I’ve been thinking you need to get out there.”
I tripped putting my leg into the skirt, and almost fell over.  “What?”
“You know, go on some dates.  Get out there.  Meet guys.  Act like you’re almost sixteen, not twelve.”
Wow.  Thanks a lot.  “Uh, why?”
She sighed.  “Because you’re almost sixteen, dummy.”
Another stall door closed, and I hoped whoever was in the dressing room with us didn’t go to our school.  The last thing I needed was people at school talking about me.  I shuddered.
Lily tapped on the door.  “Get that outfit on and get out here.  I need to check on something real quick.”  The purr in her voice told me what she wanted to check on was a guy.
Posted by Larissa at 5:01 PM 19 comments:

A smile. An encouraging word. A thoughtful gesture. Each day people interact with us, help, and make our day a bit brighter and full. This is especially true in the Writing Community.

Take a second to think about writers you know, like the critique partner who works with you to improve your manuscript. The writing friend who listens, supports and keeps you strong when times are tough. The author who generously offers council, advice and inspiration when asked.

So many people take the time to make us feel special, don't they? They comment on our blogs, re-tweet our posts, chat with us on forums and wish us Happy Birthday on Facebook. 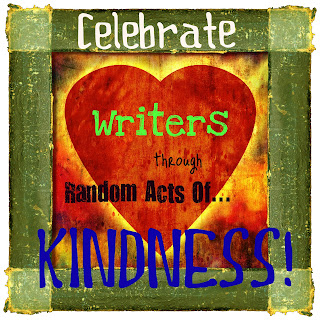 To commemorate the release of their book The Emotion Thesaurus, Becca and Angela at The Bookshelf Muse are hosting a TITANIC Random Act Of Kindness BLITZ. And because I think KINDNESS is contagious, I'm participating too!

I am picking my amazing critique partners and close friends, Jessica Souders, Christina Farley, and Tara Gallina. Without these three women, I would not be the writer I am today.  All three are tireless critique partners, cheerleaders, and confidantes, and I don't know what I would do without them. Ladies, for my RAOK gift, I have a little basket of writerly goodies for each of you!

I really appreciate Jessica (link), Christina (link), and Tara (link). If you have a minute, please stop in and tell them how awesome they are!

Do you know someone special that you'd like to randomly acknowledge? Don't be shy--come join us and celebrate! Send them an email, give them a shout out, or show your appreciation in another way. Kindness makes the world go round. :)

Becca and Angela have a special RAOK gift waiting for you as well, so hop on over to The Bookshelf Muse to pick it up.

Have you ever participated in or been the recipient of a Random Act Of Kindness?  Let me know in the comments!