Review: Ever by Jessa Russo

I am happy to be participating in a review-only blog tour for Jessa Russo's debut, EVER. 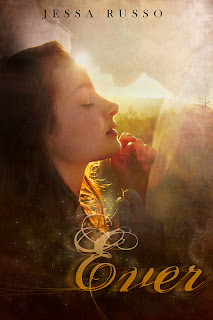 Jessa on Twitter
EVER on Amazon
On Barnes & Noble
GoodReads/EVER
GoodReads/EVADE
Description:
BOOK ONE in The EVER Trilogy

Seventeen-year-old Ever’s love life has been on hold for the past two years. She’s secretly in love with her best friend Frankie, and he’s completely oblivious.

Of course, it doesn't help that he’s dead, and waking up to his ghost every day has made moving on nearly impossible.

Frustrated and desperate for something real, Ever finds herself falling for her hot new neighbor Toby. His relaxed confidence is irresistible, and not just Ever knows it. But falling for Toby comes with a price that throws Ever’s life into a whirlwind of chaos and drama. More than hearts are on the line, and more than Ever will suffer.

Some girls lose their hearts to love.

Some girls lose their minds.

Ever Van Ruysdael could lose her soul.
First, let me say, I LOVE this cover. It's really perfect for the set up of this book, and the romance within. Well done, Curiosity Quills Press!
I have to admit, I had a difficult time getting into Ever. For me, it was a case of starting too far into the action. I really wanted a sense of what her relationship with Frankie had become (in scene, rather than Ever thinking about her unrequited love for him). I wanted to know how Ever and Frankie lived in the same house--what their friendship was like before getting into the meat of the story. However, after a few pages of Ever's thoughts about Frankie, we are introduced to the secondary love interest, Toby.
Toby is hot, and the romantic scenes between him and Ever are very well done. As is the mystery surrounding Toby. It is clear to the reader that there is more to him than meets the eye, and I found myself pulled between wanting Ever to be with him, and not trusting him at all.
I'm a sucker for great best friends, and Ever's BFF Jessie is also well done. I loved her spunk, and her love of pink (yay, pink!), and really, just everything about her.
I had a harder time loving Frankie. The lack of knowledge of Frankie and Ever's normal worked against me connecting to the romance here. I didn't feel it at all. And, to me, Frankie sounded like a ghost from the 1950's, calling Ever "Doll" or "Dollface" and smoking. Of course, then there's the issue of him being a ghost. LOL.
I was definitely more drawn into the novel when Toby's ex Ariadne came on the scene. She added some much-needed tension, and began to move the plot forward. From there on, the novel proceeded much more smoothly for me, and I really enjoyed it. There are some great twists and turns toward the end, but I won't say more so I don't spoil it for anyone.

My final minor complaint is the ending. It is a MAJOR cliffhanger, and really didn't feel like an ending to me. That being said, I was definitely invested in Ever's story by that point, so I will be reading the sequel EVADE to find out what happens.

Final verdict: 3 out of 5 stars

I received a copy of this book from the author to read and fairly review. I was not compensated in any way for said review.

Jessa is celebrating by having a giveaway! Go here to enter!
Posted by Larissa at 12:59 AM 2 comments: